» CENTRUL CĂRŢII › Reviste › PLURAL MAGAZINE › Without ©
There's moths cooking in the lampshade… the spider web connects the bed sheet to the floor……in my bed of planks, with silk bedding, with swan down… From: arian21x@yahoo.comTo: flu_viu_mm@yahoo.com A (neo)bohemian is living in Bucharest and doesn't imagine himself in Beverly Hills. He drinks his coffee at Green Hours (too), though without trickling. He always reads, ritualistically, close to sublime respect, Idle Princes of the Old Court and doesn't have a temporary residence visa, his hair gives one the feeling of being untidy, his clothes are in forever surprising combinations (he doesn't, however, think of himself as educated at the Versace school). He's fascinated by funk/no-jazz, chill out, electroclash, drum'n'bass, acid house and, more recently, by Sigur-Ros and Röyksopp. He refuses as a matter of principle to go to open-air concerts and sophisticated parties (when he does, though, he has a good time). He moves among kings, every now and then the kings put their crown on his head, but he's not interested in that. He's not interested in epaulettes either, nor in medals, nor in the red carpet, nor in his own name (though he's got one in the birth register, another for his ID, another for his email address, another for Dilema). (He writes but does not publish, he prefers sending emails). He can't stand the idea of elite (that's why he doesn't move in packs). He's a consummate flâneur of the urban, he's the wandering player and carries his game with him wherever he goes, the joy of looking is triumphant in him. He keeps watching, he watches those who watch themselves, he watches those who watch him. He passes by but not unnoticed (though he's not seeking that). He's visible but not disclosed. When he goes to Web, he amuses himself with the hidden, perfidious pretensions, the mincing, tired gestures of some people that affect the interesting, the fascinating, the unique. When he goes to Iaşi, he make fun of Boema padded in filth, tired posters, with tables full of peel, of cherry stones, of elbows and slow metaphysics, of lime tree scent, of hut, of so lyrical a youth saved by/in Periferic6. He prefers going to the djDemocracy parties (organised by T.om W (because he's valid anytime, both with and without the full stop). He thinks the decadence of the bohemian style has been captured in Roxana's gesture, who, on a Saturday night, lipstick on her lips, her face made-up, perfumed, her clothes well-matched, goes to an internet café, where she's never been before. One of his teachers described him best: you have to hammer a nail and tie him to it or else he'll fly away. He doesn't think of himself as bohemian, but others recognise him as such. He's alternative (he loves the alternatives: punks, sk8ers, tattooed, pierced), but he can also be alternative to alternative. He went to an interview once only because it was taking place on Hope street, ground floor, and of course he didn't get the job. A (neo)bohemian always looks for the almost demonic love of angels, of god, of reality, of childhood, of himself. He's eclectic but never hermetic. He's a jigsaw of shyness and nonchalance, joy and immense sadness. He spends his last money on a taxi ride, on flowers and sweets, on trifles. He collects ads about lost dogs, ways of crossing oneself (in the orthodox way), and labels announcing sales. Despite any risk/insolence, he's wearing his pink socks and shooting a video clip for his favourite star; moreover, he can afford to turn down an extra part (though he is not an actor). He loves dance (but not with ecstasy dilated pupils), especially The lost steps, although he's Prisoner in the thorax. He goes to the theatre and he too was at a loss to understand what it meant to be Straight as a line. He's courted by the perfume of decadence but by that of green papaya as well. It's crossed his mind at least once to become The Collector, Albert, to go into Studio 54 and listen again (and for ever) to the sound of shoes walking in Italian films. In exchange, he's understood Why the child boils in polenta. He's got a syncretic attitude, and his chairs are completely overrun by tired D&G clothes. He's failed several exams, meetings, etc, because he didn't know what day they were on. Some say he's going to lose himself, others that he's going to win himself. And finally: he's got the cheek to write an article about bohemians when he has final exams the following day. From Dilema, July 4-10, 2003 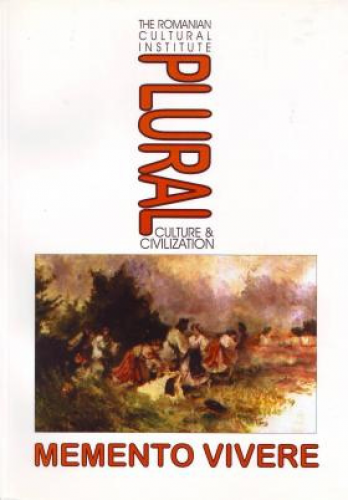