The Monasteries of Oltenia. Art and spirituality

Father Iustin Marchiș – A graduate of the Sibiu University Theological Institute with the thesis The Infirmary Churches of the Monasteries of Oltenia, he was consacrated at Cozia Monastery, and ordained a hieromonk at Frăsinei Monastery. He worked as a museologist at Cozia Monastery, a serving priest at Căldărușani Monastery, and he was the abbot of Cheia Monastery in Prahova county. Presently he is the chaplain of Stravopoleos Monastery. He was also a visiting professor at the Bucharest University of Architecture and Urbanism and a member of the Artistic Components Commission of the Ministry of Culture. He has published essays and articles in Romania and abroad, an dis the author of the illustrated monograph of the Stavropoleos Monastery.
Elisabeta Negrău – Art historian with a PhD from the Bucharest National University of Arts, whose interest has focused on the iconographic analysis of medieval mural paintings in Wallachia. She has published articles in reviews of the Romanian Academy and other specialized periodicals. She participated in the indexing of the Brancovan mural paintings in Vâlcea conty, a project developed and supervised by the Bucharest National University of Arts in 2006-2008 (Repertoriul picturilor murale brâncovenești, județul Vâlcea, two volumes, Editura Universității Naționale de Arte, Bucharest, 2008).
Vlad Bedros – PhD lecturer at the Art History and Theory Department of the Bucharest National University of Arts and specialist in the iconography of the medieval mural painting of Moldavia and Wallachia. He has attended international conferences with a series of research papers, and has published articles in notable periodicals. He participated in the indexing of the Brancovan mural paintings in Vâlcea conty, a project of the Bucharest National University of Arts supervised by professor Dr. Corina Popa, and published his articles in Repertoriul picturilor murale brâncovenești (Bucharest, 2008).
Foreword
„Creating an album that presents the artistic patrimony of the monasteries in the historical province of Oltenia is an editorial first. So far, preoccupations with the founding phenomenon in Oltenia have almost exclusively resulted in works such as artistic monographs of the various areas, and scholarly studies or syntheses of art history, most of them published in editions less accesible to the regular reader.
With this album we intend, foremost, to present those old monastic settlements spread out all over Oltenia, whose values have been unjustly presented less to art lovers. The monasteries of Oltenia form a surprisingly rich and diverse patrimony, whose special importance comes not only from the architectural and artistic qualities of the monuments – which were built at various historical times, and, many of them, recently restored – but also from their cultural value as, since the beginnings, have played a scholarly role, creating Romanian ecclesiastical culture. The long tradition of Oltenian monasteries – arguably the oldest in Romania, whose origins go back to the 14th century and which continue today – is an additional reason for creating the present album. One of its main parts is contained by the monuments founded by voivodes Matthew Basarab and Constantin Brâncoveanu – presumably the most valuable art patrimony in Oltenia - , which needs an even greater recognition today, when we are commemorating 360 years from the death of Matthew Basarab and of 300 years since Saint Constantin Brâncoveanu’s Ottoman martyrdom.
The texts in this album speak both to specialists and to every reader who loves culture and art. The newest research on the history and the artistic particularities of the monuments are dispalyed in a form accesible to the regular culture reader , being emphasized through exceptional photographic illustrations. However, at the same time, we felt it our duty to bring into attention the cases where deficient restorations have altered the original painting up to falsification, or where old monuments have undergone so much degradation that it threatens their future existence, needing urgent conservation and restoration interventions. We expect that this album will arouse the interest both of readers who love old Romanian art and culture and of the institutions empowered to intervene and save these values. “ The Authors 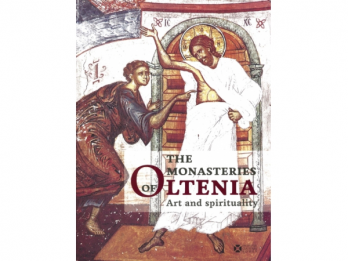