Queer figures constitute the salt and pepper of literature since, at least, Petronius's Satyricon and Apuleius's The Golden Ass. Writers are mesmerized by irregular minds, behavioral oddities and abnormalities because people at large crave for the dark side. From humpbacks to bandits, what stirs up curiosity produces literature. The fascination with the abhorrent is a preferred playground of entertainment, but also of digging into the deepest strata of human psychology. Unsurprisingly, the best-known novel character across universal literature remains Don Quixote, a puzzling, typical book-freak who mixes up reality and fiction and leads an eccentric life, out of the norm, inside a society framework which is perfectly and conventionally structured.

The seduction of the freakish and of the clandestine satisfies a certain need of knowledge, of penetrating the obscure worlds of the unconventional, the fantasies of madmen, the tortuous proceedings of a criminal's mind, the (thought as) extravagant life of the excluded and marginals. Such knowledge, frequently turned into sheer entertainment on the theme of the abnormal, is also a matter of power, a strategy of containment, of managing and taming the unknown, the obscure, of wrapping it in the stylish envelope of an exemplary adventure, a circus of thoroughly transparent, teaching obscurity. A parable of the nonsense that finally makes sense.

The enchanting force of the outlawish also stems from its bodily connection. Behavioral errancy is usually lined up – in literature – with bodily nonconformity, with abnormalities of the physical kind ranging from perceptive impairment (like the blindness of Zahei in Vasile Voiculescu's novel) to excessive endowment (like the irrepressible force of Panait Istrati's Codin). Significantly, both of them encode a transfigured structure of desire, of sexual attraction, that stamp the lives and deeds of Zahei and Codin respectively. Abnormalities, excesses of every kind turn on. Their bodily extravagance is simply the surface of an inner bodiliness that charms, exploiting the thrill, the fear in order to boost the sex appeal.

There is also a sexual spell of the insane, of a secret initiation into the seductive labyrinth of alienation, such as the one in Breban's novel, or in Eliade, Bălăiţă, Barbu and Arghezi's pieces. The arousing force of collapsing into the interest in crime and deviation lies at the core of Slavici's thrilling The Lucky Mill.

The present issue of PLURAL is therefore an incursion – or excursion – into the quivering world of anomaly, of the numerous odd characters that inhabit Romanian literature. It tries to point out the connections between irregularity, quaintness, foolishness, madness, excess and crime with the currently unapparent stakes of power, sex and knowledge, via the more visible means of fear, corporeality, and the parable.

Thus one may approach some historical figures of repulsive autocrats and discretionary rulers such as Queen Kiazhna by Odobescu and Alexandru Lapushneanu by Negruzzi. One may also scrutinize a collection of dystopic characters of phobics, maniacs, outrageous or melancholic misanthropists, stingy people, or plain madmen such as Cărtărescu's fabulously deranged Architect, Caragiale's topsy-turvy Canutza, Călinescu's pathetic noise phobic, Breban's Castor Ionescu, the bureaucrat that goes mad progressively and meticulously as if doing a job, Delavrancea's Harpagon, Hajji Tudose, the ultimate miser of Romanian literature until today, Bălăiţă's weird couple Antipa and Anghel, who recedes into homicide as a supposedly necessary healing, or Sadoveanu's troubled, delirious brothers from The Place Where Nothing Happened, and Arghezi's bewildering, hermaphrodite bandit in The Pansy, or Barbu's more hermetic parable of melancholic estrangement, King Crypto and Laplander Enigelle.

Further away from them, one may encounter the thrilling figures of demonic possession, of criminals and control freaks such as the wicked, master-and-servant (or slayer and victim) couple Ghitza and Lica the chief swineherd from Slavici's masterpiece The Lucky Mill, Duiliu Zamfirescu's unscrupulous, rude and offensive Tanase Scatiu, or Răsvan Popescu's ruthless and gloomy Underman. Opposite to them, there are the exuberant, cultured, uncanny figures, the picturesque embodiments of transgressive social and intellectual errants such as the heroes of Eliade, I. D. Sîrbu, Aldulescu and Bănulescu, who turn the aberration and marginality into a baroque universe of mysterious decompensation. Finally, one may meet the real marginals and oppressed, the victims of prejudices and social pressure or rejection, whose violent breakdowns turn them into perpetual outlaws. Such is the case of Vasile Voiculescu's Zahei the Blind, the gentle force who, by virtue of his being sightless, endures the most awful injustices and pains, of Panait Istrati's Codin, the defenseless giant who turns into an ogre, and of Liviu Rebreanu's hungry and furious peasants who turn into ferocious killers precisely to deepen their perfect doom.

Far from being complete, this gallery of characters that go crazy in Romanian literature is rather an incitement to reconsideration, a proposal of reviewing in a different light several apparently amusing or merely nauseating figures. 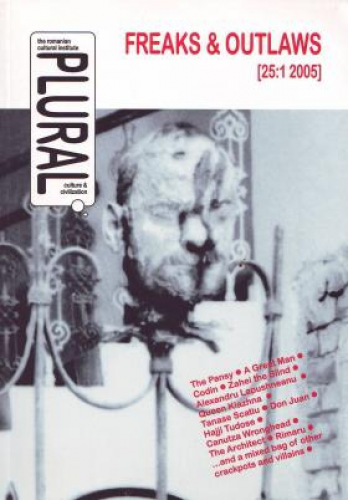