Just like all the other peoples, when they don't hate them outright, many Romanians have less than a high opinion of their neighbors: Bulgarians are seen as coarse – but resourceful – vegetable growers, Hungarians – as bloodthirsty (but proud, hardworking, reliable) barbarians who ate raw meat pressed under saddles when they invaded Europe, the Slavs from the north, such as Ukrainians and Russians – as ruthless tyrants who stole part of Romania (but what a great literature they've got!), and Serbs – as helpless fanatics (although a few years ago, while NATO was preparing to bomb Serbia and stop Milosevic's war against his neighbors, and his own people, a former President of this country raised blunder to new diplomatic heights, by saying that Serbs – whom the Romanians, more inclined to compromise, often consider braver than themselves – and the Black Sea had always been the Romanians' best neighbors).

But peoples beware! Romanians are equally harsh on remoter nations. As the just-released results of a British poll by travelers' website "Where Are You Now?" indicate the French as "the most unfriendly nation people on the planet" and "the most boring and most ungenerous" (adding insult to injury, a The Daily Telegraph editorial ascribed to them garlic and stale Gitanes rather than Chanel 5 as representative smells), with the Germans as runners-up and the Spaniards following closely, and the Brits regard themselves as completely average (though four percent of respondents, all of them British of course, say "they would only talk to other Britons when they are abroad"), Romanians can also proudly point at their own dislikes, most often coupled with positive stereotypes: the arrogance vs. the nobility of the English, the Germans' lack of humor (they are so good at making things work, though! We need them back, what!), the pathetic French struggling to bring a former imperial glory back from the dead (forget Romanian culture drew heavily on theirs!), the superficiality of Italians (despite the embarrassing research revealing that, genetically speaking, Romanians and Italians are closely related – it is the Roman founding fathers who conquered this territory 2000 years ago, after all; could this be why no female pedestrian can feel entirely safe here?), the Americans' ignorance (you bet they don't even know where Romania is on the map! Yet Romanians, almost without exception, are having American Dreams – if possible, with slighter effort), the Arabs' deceitfulness (doesn't mean we're going to boycott their delicious pastries!), the Chinese mob disposing of their rivals in suitcases thrown into our beautiful capital's lakes, which in the 1990s turned from what threatened to become a fashion into an urban legend (we may add the multi-millennial Chinese wisdom and ingenuity vs. downmarket underwear, plush rabbits, rubber-smelling gym shoes, and billions of fake 'anythings' flooding into Romania). The list is open – and gleefully filling up. No wonder, as Romania (not unlike many a country in the east, south or west of Europe) was trampled across by so many nomadic peoples during the Great Migrations and later, that I remember having to resort to mnemonics to memorize them in elementary school.

As it had means of enforcement hardly available to democratic states, the communist regime managed to muffle ethnic tensions, which may be looked upon as a success, considering the bloody interwar period; it even created, in the heart of the country, a Magyar Autonomous Region, following the Soviet administrative model, which only lasted a few years. Despite this, twenty or thirty years after World War II, one could still hear Bucharest children (!) calling their German playmates "Hitlerists", and the Hungarian ones by various slurs, the commonest of which may be euphemistically translated as "lackland". One of the favorite stereotypes of "oral legends" circulating among Romanians tells of the Hungarian sales-clerk from some (or any) little Transylvanian town with a Hungarian majority, who will not sell you a loaf of bread (or soda, or motel room) unless you ask in Hungarian. A soccer game between the national teams of Hungary and Romania will spark off more national pride and adrenalin rush than England vs. Germany (or Argentina). To strike a balance, in recent years Romania has managed three victories against their archrivals (in whose team played a naturalized Romanian ethnic; Romanian Hungarians have proudly represented Romania for a long time, as players or coaches), which they had only once defeated before, in the 1930s, when many of the best players of the Romanian side were Hungarian!

Not surprisingly, as they have always "enjoyed" a special status befitting the chosen people, and despite dramatically dwindling numbers during World War II (when around 400,000 perished), and later through emigration, to Israel in particular (which, under communist rule, entailed accusations of Zionism, and jail), the few thousand Jews that remained in the country have had to deal with a brand of deeply ingrained anti-Semitism; it used to be mostly latent, but after the 1989 change of regime, increasingly aggressive – though not lethal, as in the 1930s or 40s. The usual accusations: bringing communism to Romania and, of course, selling (or buying) the country out. Even cultured people, or those who claim to like Jews, or at least to be indifferent to them, may sometimes drop the disparaging appellative for Jews (which originally meant a mythical giant figure).

I experienced a case of uncertain culturalism of sorts myself: before emigrating from Romania to Israel in the 1980s, I had almost never been considered a Jew by Romanians, not because my mother was a Christian Romanian (few people in communist – or post-communist, for that matter – Romania knew that, "technically", one is Jewish by maternal descent, and even fewer may have cared about that), but because, aside from old pop jokes, it was not Jewishness that constituted the target of street-level nationalism any more; not least, I was, through education and behavior, as Romanian as could be. As soon as I left for the Promised Land (sold – together with my family – by the dictator Ceausescu to a state that, despite religious views which are powerful there, had passed a law recognizing the right of any person, however little Jewish blood runs through their veins, to immigrate to Israel), everybody's perception changed radically: my Romanian friends suddenly discovered my Jewish side (as I did myself), while to Israelis I appeared as a "Romani". According to Alain Pierrot (Multiculturalism: A Language Falsely Considered to be Concrete), to be truly bicultural translates into the priority of recognition as a member with equal rights by both "communities". I hadn't become bicultural even after a few years' stay in Israel; I wasn't even mono-cultural, judging by the perceptions of some people I came into contact with, who tended to consider me a foreigner; I had turned into a non-cultural, or temporarily deculturalized type.

Today, however, the worst feeling of dislike is directed against Gypsies. One of the reasons is that many insist on being called Roma or Romani (the word for man in Romany), which is perceived as having generated confusion among foreigners: many Romanians are convinced that the thieves and beggars who invaded western Europe in the early 1990s, posing either as "Romanian victims of the anticommunist revolution" or "Roma people persecuted by the majority", have brought about the bad reputation that is besetting Romania now. While Chinese gangsters were viciously defiling our lakes (see above), our nature-loving Gypsies took revenge on the Viennese ones, by barbecuing whatever swans they could lay their hands on. There is a controversy to this day whether this is just another urban (shall it be named garden?) legend, or the smoking truth.

According to the 2005 Rural Euro-Barometer, published by the Open Society Foundation, four out of five Romanian villagers believe that Gypsies are wont to break the law, and half of them (two in five) even say that they should be forced to live separated from the rest of society, because they cannot integrate. 46 % think that the state should take steps to prevent the Gypsies' increase in numbers, whereas only 27 % agree that the state should give more subventions and assistance to Gypsies. It is perhaps hard to believe that apartheid and sterilization based on ethnic origin are notions that survived in Europe (not just in Romania, if one looks around); the more traditionalist the society, the tougher the job to uproot them will prove. The Romanian Government elaborated a "Strategy for Improving the Condition of the Roma" for the interval 2001-2010, which has already produced some results. In the field, however, cold statistics show that, while steadily decreasing in parallel with the other ethnic groups', the poverty rate of Romanian Gypsies still stands three times higher than the average.

The same Euro-Barometer showed that almost a quarter of Romanian villagers believe that ethnic minorities have too many rights, while 19 % think they have too few, although barely one out of five villagers has people of other nationalities in their circle of friends and acquaintances. Obviously, some opinions arise from tradition, the media, or other indirect influences.

Inevitably, the share of each minority within a multicultural society, which may vary with any kind of factors, including the period of time it has been living on Romanian territory, its propensities, or its sheer numbers, would have been hard to faithfully reflect in a single book comprising all of them. Plural is not attempting a fair portioning of pages, ideally proportional to the merits of each community, because it does not intend to ascertain merits. Instead, we see this issue as an open-ended book, which can – and surely will – be completed in time.

The readers must be aware that, aside from contributions coming from within the respective communities, some of which deal with ethnic groups other than their own, this issue also contains several works by Romanian authors, tackling a variety of subjects that bear on one or more minorities. Fiction writings were grouped at the end of each section, with those by Romanian authors coming last, where the case may be. 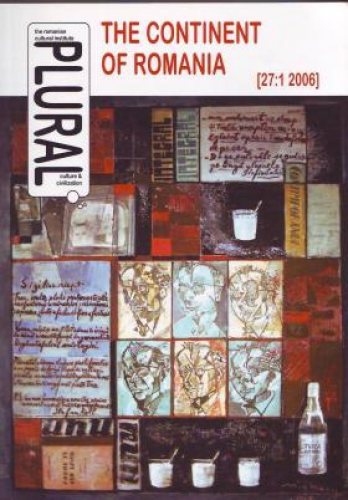