Some words are graceless. Among them, I would list the word minority without any hesitation. When somebody says I am a minority member, I take offense, no matter what that person might give me in exchange. If we consider the human body, the heart and the brain form minorities, while the bones and the muscles form the majority. So stupid! The stupidity is even greater when the complexity of the phenomena this difference is applied to is greater. For instance, in culture.The above sums up the way I relate to the culture of ethnic groups who currently live or used to live in Romania; I cannot conceive of those cultures as competing, I can only see them as being complementary. I sometimes compare them to the fauna and flora of a warm sea, where one species grows on the body of another, and they are all related to everything, making up a living, almost unreal soup. The fact that each species has a very precise role to play and that the disappearance of one of them jeopardizes the system is commonplace to biologists and environment specialists. But what about culture, could culture be any different?Currently, people are only partially aware of the giant wealth guaranteed by cultural diversity, so words, gestures, meanings, and objects get lost, they disappear, as if they had never existed. When people become persuaded that each small portion of culture is priceless, they will start acting and thinking differently. How? They can begin with the respect for cultures we have felt when we developed this Plural issue. 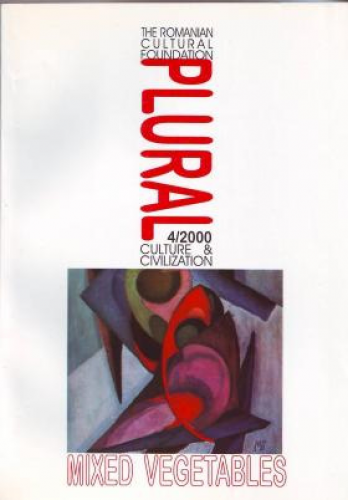