Letizia Battaglia, aged 80, still tries to improve the world for the benefit of the new generations. She has always been a rebel, rejecting the restrictions of a traditional marriage and striving for self development. She became a renowned photograph artist and also a political activist. As an artist, she did not rely on highly credited models, but kept alert to the expressive details of everyday life, which she managed to capture and to preserve. She did not intend to be just a witness, but also a factor of change. Her memories account for a long span of the history of Sicily, marked by the intricacies of the Mafia's shady involvements in the social and political life. At an advanced age, she still prefers action to detached wisdom.

We remain in the Italian environment with Adam Tooze, who considers the favorable view of the US establishment on Mussolini's regime in the 1920's. The dynamics of the Italian economy and its energetic attempt at modernization appealed to the American pragmatism. Moreover, contrary to Hitler's Nazis, Mussolini's fascists were keen on Modern Art, they appropriated Marinetti's futurism and promoted Pirandello's theatre. The present days a posteriori perspective helps us understand the intersections of the various forces from long ago.

Emperor Franz Joseph claimed that Herkulesbad was the most beautiful spa of Europe. He contributed to it by ample architectural developments, continuing the projects achieved in the times of Maria Theresia and Franz I. Empress Elisabeth (Sissi) used to come here often, sometimes for quite extended stays. She overtaxed her suite in difficult hiking parties and impressed even the local shepherds by her outstanding physical condition. Eventually, the spa decayed and some beautiful buildings fell into ruins, but lately one can notice encouraging signs of renewal. Dorin Balteanu depicts in an engaging way a delectable place where one can recover one's health, but also one's inspiration.

During communism, every graduate student was provided a job, which he was obliged to undertake. Those from the humanities departments had to go to distant villages as teachers. Dan Ciachir evokes his "poetic exile" in the Danube Delta. While suffering from the lack of contact with the cultural life of the big city, he managed to transform his frustrations into an enriching experience.

The entire world is focused on the Middle East. This fact makes most interesting Guillemette Crouzet's attempt to explore the development of this geo-politic concept. Contrary to common wisdom, it was not the Western Europe, but the administration of India that defined it as a zone of protection for the British Oriental possessions. Middle East concerns also Adrian Mac Liman, who focuses on the Christian communities in this part of the world, which are threatened by the fanatics of Islam. This explains why these communities prefer "the lesser evil" that is the Assad regime, which, while denying their freedom, provides them at least some security. The Muslim fanaticism is present in the destruction of the cultural heritage of Timbuktu, as shown by James Romm. It makes no sense, since many of the burnt manuscripts belonged to the Islamic tradition. Some of them were rescued and transported to Bamako, thanks to the efforts of those who still care for culture. The wave of immigrants from Africa and Asia reaches Europe's Southern Coast, in places like the Island of Lampedusa. Fabio Stassi describes his attempt to integrate, at least partially, some of the immigrants, especially very young ones, in the environment of libraries founded and managed by volunteers. This proves that culture can break the walls of the identity fortress.

The economic section contains two contributions impregnated by a sour humour. Mircea Cosea considers Rutger Bregman's extravagant proposal to give up the cumbersome system of social security (and thus save a lot of money) and replace it with the simple method of distributing money indiscriminately to all people. Paul Krugman underlines the contrast between Mervyn King's bold and virulent critique of the present economic policies and the lack of novelty of the solutions suggested by this ancient governor of the Bank of England.

The come-back of the religious fervor is by no means restricted to Islam; it is also present in Christianity. The philosopher Jean Lauxerois expresses the revelation he experienced in Romania, where the Orthodox faith pervades all the practices of the community. His interesting considerations concerning the phenomenology of the icon joins Jean-Louis Schlegel's reflections on the various forms of iconoclasm. One of these is the non-figurative trend promoted by the historical avant-garde. We live under the imminence of Apocalypse ("Apocalypse now"!), claims Ion Vianu, that is why we have to find in the Christian tradition a solution for a Pax Christiana, which supposes "the balanced coexistence of the victorious and the vanquished". Else, we may fall into the trap of populism, as Rodica Binder shows. She examines the dubious origins of this concept and how it can lead to a dangerous closure in the limits of one's identity, as in the slogan "Europe for Europeans!".

It is not by chance that we grouped Tim Crane's paper on Wittgenstein with Edward Mendelson's study about the anthropologic impact of the information and communication technology. Wittgenstein proclaimed that his philosophy would signify the end of all philosophical investigation. As such, it provides an appropriate framework to make sense of the way human nature itself changes as a result of digital practices, against the commonsense that human nature is always the same across space and time.

The section "Literary ideas" includes a philosophy of wandering about as a method to stimulate literary creativity, developed by Peter Handke; an analysis of the concept of "coincidence" in Humphrey Jennings' literary and cinematographic work, by Miruna Fulgeanu, a distinguished student at the Cambridge University; Stephen Greenblatt's pertinent study of the significance of Shakespeare's works in our time. The anniversary of the Bard's birthday and the commemoration of his death occasioned a series of exciting experiments, such as Alan Brownjohn's sonnets "after Shakespeare's 65", which the author graciously offered us for publication. The positioning side-by-side of the original and the translation enriches the meanings of these precious poetical jewels. The poetical effect is amplified by the juxtaposition of Alex Stefanescu's comments on Eminescu's "easy-going little poems", which lost their luster owing to their transposition as "romances". Roxana Baudouin reveals us the (still) exotic territory of Sub-Saharian African literature, pointing to the fact that this asserts itself as well by the content, as by the irreverent use of French, with innovatory effects. The fragments presented in Biblioteca "Lettre Internationale" ("Lettre's library") aim to stimulate the readers' interest in reading the integral texts. However, Constantin Abaluta's delicate proustian self-contained short story was written especially for us.

Vladimir Bulat considers the Cluj Art School, which is indebted to the tutelary figure of Luc Tymans. The author unveils the mechanisms involved in the outstanding commercial success of some members of this School, such as Adrian Ghenie. Iolanda Malamen and Adrian Mihalache analyze the creation of Paula Barbu, whose works are on our covers. Grigore Ghyka confesses to Emilia Cernaianu his irresistible passion for works of art. This passion was the source of his engaging private collection, but also to his outstanding career at Christie's and Sotheby's.

Geroge Enescu's opera, Oedipus, is one of the major works of the past century. However, its originality prevented a widespread recognition, but the recent staging at Bucharest Opera and at Covent Garden in London revived the interest of the musical world. This last endeavor is duly analyzed by Fintan O'Toole, who relies on the research of the Romanian musicologist and composer, Pascal Bentoiu. A very interesting study by Philip Johnson focuses our attention on the way "noise" was appropriated not only in contemporary music, but also in contemporary fiction.

The fascinating story of La Grande Arche de la Défense is narrated by Laurence Cossé in subtly romanticized way, and by Tudor Banus, in an irreverently critical, but highly professional approach. We added to this final section Mariana Croitoru's in-depth study, which situates the architect Duiliu Marcu, the author of many a prestigious building, in the international context, wherein he definitely deserves a prominent place. 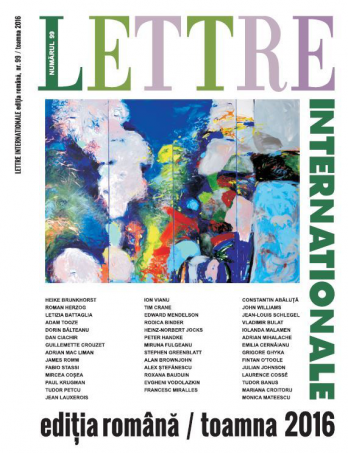