Rereading history helps us to better understand contemporary issues. At their turn, present-day events modify our retrospective view, so that the past looks different, which explains why history has to be periodically rewritten. Anne Applebaum uses the historical approach in order to explain the situation in today's Ukraine, a nation which became a sovereign state before forging a clear-cut and distinctive collective identity. She includes in her paper interesting fragments from the notes taken by the Welsh journalist Gareth Jones, who visited the region in the beginning of the 1930's, during the famine deliberately provoked by the communist authorities. Similarly, Timothy Snyder examines "Putin's wars" using as a reference the Napoleonian period. He claims that Russian policy is a sort of "Bonapartism without Napoleon". To be sure, Putin has Napoleon's guts and determination, but not his genius. The historical perspective is also employed by Rodica Binder when examining Germany's option concerning the phenomenon of the migration. Germany's complicated past accounts for its government's feeling obliged to take the victims' side. The refugees from Syria, Pakistan or Maghreb conform better to the generic figure of the victim than the "shrewd and cunning" Greeks who do not deserve to be treated indulgently. Priya Basil is by no means a victim, but the typical successful cosmopolitan. Born in India, educated in Kenya and subsequently in London, she lives in Berlin, where she writes in English and publishes in German. She refuses to be identified according some specific place, be it her birth place or her residential one. She claims that she is culturally defined by her lectures, the languages she masters, the books she writes. Among these languages, German made her aware of the rigorous mechanisms that govern the process of communication. It is only natural that such a person should be at ease in the virtual space, but lately, claims Basil, this space functions in such a way as to consolidate one's habits of thought and to confine one to his previous areas of interest. This makes it difficult to transgress the limits already formed, which is a condition for intellectual renewal.

The "Philosophical Ideas" section begins with Jürgen Grosse's in depth study of the relationship between Cioran and Nietzsche, mediated by Ludwig Klages. The excepts are aptly selected, and the author's comments weaves them into an interesting, albeit rather sinuous discursive fabric. Eventually we get the feeling that, for Cioran, even Nietzsche seemed much too systematic and orderly in unraveling his thoughts. Another little effort towards "decomposition" would have succeeded in offering something akin to the shapeless monologues from Beckett's theatre. An appealing philosophical exercise is performed by Michel Juffé, the author of an imaginary correspondence across times between Spinoza and Freud. Juffé manages to render the stylistic peculiarities of the two thinkers. The philosopher develops his discourse more geometrico, assuming mathematical rigour, while the scientist attempts to explain everything on the basis of his theory, which is, as a matter of fact, a reductive one. Gary Wills tried hardly to study the Koran, in spite of the fact that he did not know Arabic. He was surprised by the fact that supporters and adversaries of Hitler ignored Mein Kampf, as well as communists and anti-communists alike have never read Das Kapital. He avoids such mistake by taking a step-by-step approach: he starts by marking the similitude between the Old and New Testament and some parts of the Koran; then he gets beyond the concordance table, proposing an interesting parallel between some Islamic elements and the doctrine of Saint Augustine. God punished the human hybris by subverting their magnificent project of the Babel Tower, and He did that by diversifying the languages and thus hindering the communication. Gheorghe M. Stefan shows that nowadays, although we all speak a universal language (English), the communication is rendered more difficult because of the specialization of the languages pertaining to various disciplines. The language is the same, the specialized jargons are different. This amount to keeping various areas of knowledge enclosed, which makes overall progress difficult, because of the absence of the reciprocal influences between scientific fields. If languages divided us, the cyberspace opens for us a fourth dimension, claims Carol Tavris. We can take advantage of this, provided we keep control of the weird state of being simultaneously in several places (tangible and virtual ones). Contrariwise, we risk expecting more from technology than from ourselves.

Economics theory is based on the assumption that the human agents are perfectly rational in their behavior, striving exclusively to maximize their respective utilities. Mircea Cosea argues that the idea of an abstract homo œconomicus proves erroneous, so that the theoretic economic models should take better into account the complexity of the psychic reality. Man cannot be reduced to a machine that computes gains and risks and elaborates strategies for achieving the ones and avoiding the others. Economical crises are mainly due to the ignorance of the peculiarities of the human factor. In a related approach, Adrian Mihalache, based on psychological insights, proposes a satisfactory negotiation, which concludes without either big winners, or pitiful losers.

Many a reader discovered a book and its author, who eventually became one of his or hers favorites, thanks to the literary fragments that we publish in the section Lettre Internationale's Library. We enjoyed the contrast between Constantin Abaluta's refined, poetical prose and the picturesque and high-paced narrative of Adrian Alui Gheorghe.

The section "Literary ideas" begins with the impact the translations of Mihail Sebastian's works had in the United States. John Banville's comments are somehow distorted , owing to the cultural differences, so that Nicoale Manolescu's intervention provides the necessary clarifications. We publish two letters addressed by Paul Celan to Ingeborg Bachmann, which are decoded with finesse and empathy by Iris Radisch. We found appropriate to include a former study of the Celan-Bachmann couple, by our late director, B. Elvin, the founder of our publication. H.-N. Jocks dialogue with G.-A. Goldschmidt provides interesting insights into the translation process and the semantic difficulties it involves. Mathias Enard's novel, Boussole (Goncourt prize, 2015) is very ambitious as far as its musical dimension is concerned. That is why we asked the distinguished musicologist Mihu Iliescu an in depth critical analysis of Enard's trajectory between European and Middle East composers and musical trends. A successful author, W.S. Maugham, said that books inspired by other books are purposeless, but entertaining. Gratiela Benga agrees only with the last part of this statement. She takes up the subject, with reference to the volume Voyages in the Library by Rodica Grigore, a book which observes the rigors of literary analysis, while avoiding the "linear, tedious style". Literature is also the focus of Marina Dumitrescu's dialogue with V. I. Stoichiţă. The latter, a renowned art historian and theoretician confesses that, in spite of a successful, international career, and a fulfilled family life in Switzerland, cannot help regretting his native city, Bucharest.

Georges Banu, a refined connoisseur, provides an enchanting study on the presence of the door in painting. Vladimir Bulat is focused on the studio ceramics from Moldova Republic, a delicate art wherein the hazard is intimately involved. We proudly present on our covers two recent works of a major Romanian artist, Sorin Dumitrescu. Iolanda Malamen, in her paper, does full justice to the various dimensions of Sorin Dumitrescu's artistic approach.

We publish the correspondences we receive from afar (Carmen Firan writes about Amazonia) or from long ago (Dan Ciachir remembers Bucharest in the sixties). Thomas Knauf builds a portrait of the mythical Budapest and Adrian Mihalache shows how Craiova became a major cultural meeting point, thanks to the organization of the Shakespeare International Theatre Festival. 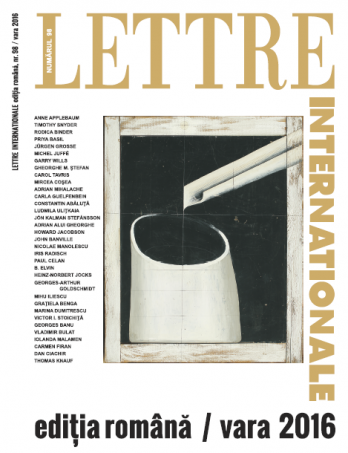