To our readers… on a red letter day

This is a jubilee: the hundredth issue of our quarterly, Lettre Internationale, Romanian editionafter a quarter of a century of existence. In 1984, when Antonin Liehm elaborated the concept of this periodical, his objective was to create a forum wherein the voices from Western and Eastern Europe could express themselves together. After the launch in Paris, several European capital cities such as Rome, Madrid, Berlin etc., have endorsed the project. The respective editions shared the title, the concept and, to some extent, the format. However, their contents differed partially, albeit some texts circulated from one edition to the other, because the local contribution had to take its right place. After 1990, the network extended in some capital cities of former communist countries, each edition in its vernacular. The financial rigor caused the disappearance of some of them. The East-West gap is less deep nowadays, but the necessity to embed the various discourses in polyphony, around some meaningful themes, remains intact. The board of the Romanian edition is perfectly aware of the fact that juxtaposing foreign and Romanian authors may contribute to the emergence of a European cultural identity. This is a mission we assumed 25 years ago and we still keep faithful to it.

As we are not much for festive events, we considered conceiving the hundredth issue as carefully as all the others, but devoid of distinctive marks, sort of “business as usual”. However, we eventually decided to point out to our anniversary by including a supplement entitled Cherished Places. Thirty-three (a highlysymbolic number) of our steady collaborators wrote essays on this subject, inspired by Tasso. We reproduced on our front cover the cover of our first issue, and on the back cover some of the previous cover fronts. More significantly, we reflected upon how our publication evolved, preserving its identity, but remaining sensitive to the changes that permanently modify “l’air du temps”, which is the fashion of the day. Our French friends from Le Magazine Littéraire celebrated recently sixty years by a supplement which included fragments from the reviews of each year’s outstanding apparition since 1966. We admire the critical perception, but we cannot help deploring the short-lived effect of a literary success. A book makes a stir, it is widely reviewed, it gets prizes, and eventually it is turned into a movie, but is soon forgotten. Our publication is not devoted to reviews, it favors in-depth commentaries, which, re-read later on, preserve their relevance. The secret of resilience is, to keep it short, our fidelity. We, the members of the board, have remained constant to the concept and the mission of the publication, as they were stated by Antonin Liehm, but also to the method and style of our mentor, B. Elvin, the initiator of the Romanian edition of Lettre Internationale. He was a man of great distinction who combined intellectual curiosity with literary taste. He read extensively, and selected with due perception authors who had something original and meaningful to say and a literary gift to express it. He managed firmly his collaborators, behaving like “an iron hand in a velvet glove”. The subjects had to be treated in-depth, clarity was a must and stylistic elegance an absolute requirement. He also imposed a balance in all arguments, rejecting polemics and ideological biases. While rising up to these injunctions, we are also committed to adapt to the “music of time”, to the changes in mentality. We opened our publication to the economic culture; we included the analyses of the knowledge-based society. Our covers reflect the creation of contemporary Romanian artists, wherever they are active, at home or abroad. We publish about them in-depth studies, which avoid the preciousness of the language present in the institutionalized art criticism, since we address connoisseurs, not specialized people. We had the privilege to publish distinguished philosophers, sociologists, writers and artists from abroad, who graciously accepted to write especially for us, on subjects that we proposed. The synergy between Romanian and foreign authors is the distinctive mark of our publication. It explains the interest of prestigious other magazines, such as Esprit or l’Atelier du Roman, to translate and publish some of our content.

We were happy to receive precious gifts on the occasion of our jubilee. Among others, the great artist Pierre Alechinsky generously offered us five drawings and a substantial fragment of one of his books. In spite of a precarious dissemination, we are known, read, or, at least, attentively perused. The illustrious graphic artist Sempé let me know personally how much he appreciates our design and our choice of illustrations. We try hard, in spite of economic limitations, to keep a subtle correspondence between texts and images, avoiding arbitrariness, but also redundancy. Shakespeare claims that the height of fidelity is towards oneself: “This above all, to thine own self be true”. Let us not forget that the line belongs to a malevolent courtier, ready to sacrifice his own daughter in the name of “state reason”. Polonius identifies himself with the political power to the point that he loses all autonomy. We ask ourselves: how to be true to your own self, when this self is continually changing, like any living creature bombarded with new stimuli? The answer is dialectical: one should remain true to the change itself. The initial value system is preserved, but it is differently articulated, according to the novelty. However, we are not satisfied with discovering novelty and put it into pages. We aim to create novelty, by getting beyond the generally accepted limits. Horatio’s slogan, adopted by Kant, is also our own: Sapere aude! We dare to learn, we learn to dare.

Our gratitude goes to all those more or less visible who helped us along the way. Our thoughts will also go Roger Campeanu (editor), Sanda Gusti (graphic editor) who together with B. Elvin, made possible our achievement. 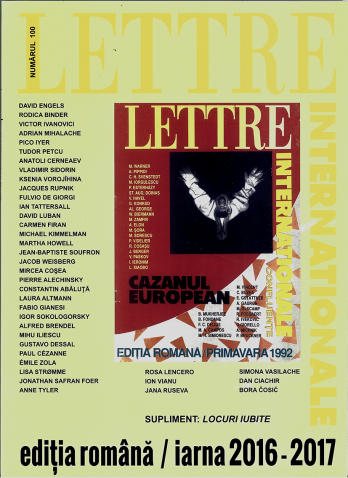