European Literature Night in Dublin
The second Irish edition of the European Literature Night, with the motto Words on the Street, took place on Wednesday, 15 May 2013. Every half an hour, for three hours, Irish public figures read fragments of contemporary literature from 12 European countries in diverse settings of Dublin’s tourist center.
The Romanian section, introduced by Romania’s Ambassador to Ireland, had a large audience thanks to a combination of the appealing Royal College of Surgeons historic building and the popularity of actor Eamon Morrissey (theatre, film and TV, best known for comedy). The actor read a fragment of Small Changes in Attitude by Romanian writer Răzvan Petrescu, translated by James Christian Brown.
During the entire evening, this public reading was listened to by over 300 people, among them members of the Irish Parliament, of the diplomatic corp and Romanians living in Ireland.


The 2013 edition of the European Literature Night in Dublin was part of the EUNIC European Literature Nights project, supported by EU’s Culture 2007-2013 programme, organized by the cultural institutes and embassies of 12 European countries: British Council, Alliance française, Italian Cultural Institute, Goethe-Institut, Cervantes Institute, Polish Institute, Austrian Cultural Forum, Romanian Cultural Institute and the Romanian Embassy to Ireland, the embassies of Belgium, Holland, Malta and Denmark, partners in the EUNIC in Ireland cluster, in co-operation with Dublin | UNESCO City of Literature. 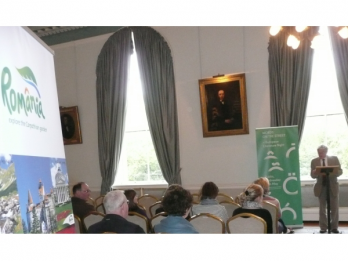