We are thrilled to be part of Open City Docs and EUNIC London's 'New European Documentary', a new series to be launched in one of the capital's most beautiful new cinemas,Picturehouse Central.

The event opens with a gala screening of the acclaimed Romanian production 'Chuck Norris vs Communism', a film which created a lot of raves since its spectacular debut at Sundance Festival in 2015.The screening will be followed by a Q&A with film critic and legendary narrator Irina Nistor, director Ilinca Călugareanu, and producer Mara Adina.

During the '80s, affected by the government's ideological censorship, the country was quietly underway via the black-market import of thousands of Hollywood films. The films were dubbed by one courageous female translator whose distinct voice captivated the whole nation and became a symbol of freedom. The fearless stories of action heroes like Chuck Norris and Jean-Claude Van Damme captured every child's imagination, but it was the lavish settings and backdrops that mesmerized this unique audience.

Ilinca Călugăreanu is a London-based Romanian documentary filmmaker. She studied at Manchester's Granada Centre for Visual Anthropology. Her short films have been screened in festivals around the world. Călugăreanu's credits include 'The Writing on the Wall' (2006, Romania) and 'Endgames' (2008, UK), distributed by the Royal Anthropological Institute. She has also been working as an editor for fiction and documentary shorts and features for the past 5 years. She has a background in anthropology with a focus on communist and post-communist Romania, which gives her a unique perspective on the story of the VHS phenomenon. In 2012 she founded Vernon Films, a UK film and documentary production company, with her sister Mara Adina.

Irina Nistor worked as a translator of TV programmes in Romania under the communist regime, and is known for secretly dubbing over 3,000 banned film titles on VHS tapes smuggled in from the West. During the time of the Cold War, these tapes quickly spread throughout the country, and her voice became widely known. In a recent New York Times video about Nistor, one of the interviewees observes: 'We did start to wonder why all the films were dubbed by the same voice... (Nistor's) is the most well known voice in Romania after Ceausescu's...' Irina Nistor worked for The Romanian Television from 1980 until 1999, first as a film translator, then as a producer. She remains active within the Romanian film industry. In 2012, she launched the Psychoanalytic Film Festival, which was the Romanian extension of the European Psychoanalytic Film Festival presided by Italian director Bernardo Bertolucci.

Mara Adina established Vernon Films in 2011, an independent film production company based in London. In 2014 she released Counterpart, the first English-language film directed by two-time BAFTA-winning director and Golden Bear nominee Adrian Sitaru which opened at Clermont Ferrand International Film Festival and has secured distribution in Europe, UK, and North America.  Adina recently completed "Chuck Norris vs Communism", produced in association with Passion Pictures, which premiered in competition at Sundance 2015.

EUNIC & OPEN CITY DOCS - The films have been carefully selected in a collaborative process involving all the European National Institutes for Culture/ EUNIC and London's dedicated documentary festival team, Open City Docswho are based at University College London. 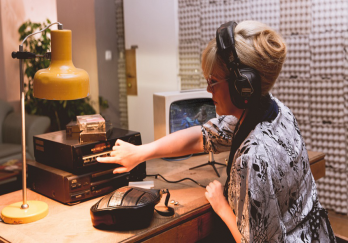