If we refer to the interwar period, believed to be a landmark among other periods of history, it was in fact an agitated, convulsive interstice in which many older weaknesses of the social body, especially of the ruling class, were prolonged. The new political organizations, some of which were of an ethnic nature, while others had sprouted from the postwar social reality, led to all sorts of ways of structuring and de-structuring, mergers and amalgamations, which were often seen by society as sources of frustration and despair. For a while, the political life was based on a duality (National Liberal Party and National Peasant Party), but at the same time the idea of class parties gained ground. Profound discontent, especially among the new generation, which had barely come out of the trenches, induced the birth of extremist movements, either right of center or left of center. They often left a tragic mark on the above mentioned interstice and eventually led to an authoritarian regime (Carol II) and military dictatorship (Ion Antonescu). The analysts of the period note, aside from the frailty of the political life, which was explicable, the low civism of the electoral mass and external factors unfavorable to the stability of the system. The liberal program of modernization had a real chance to bring about the foreseen effect, in the line of European synchronism, but the great crisis between 1929 and 1933, and the successive social-political convulsions, considerably diminished its efficiency. The "by ourselves" politics, reactivated from the liberal tradition of the 19th century, could not be valorized according to the expectations. The alternative, offered by the National Peasant Party which benefited from the Transylvanian experience and the massive rural support from the extra-Carpathian areas, was undermined even more by the circumstances. Enjoying the help of some intellectual nuclei, it could have offered the Romanian society the necessary balance between center-right (Liberals) and center-left (National Peasant Party members) ensuring a new "rotary press" of power, which nevertheless failed to become functional. The idea of elevating the rural civilization, although in agreement with the project of modernization, which in fact meant "westernization", was only partially put into practice. The fusion between the Peasant current of the old kingdom and Transylvanian nationalism seems to have remained incomplete, and the modernization foreseen in the spirit of that party turned out to be impossible. The idea of a "peasants' state", put forth again from time to time, was in fact anachronistic, since the competition between the states was especially in the field of industry and commerce. As for the social-democratic program of modernization, although it had had a certain historical tradition in Romania and enjoyed external support, it didn't stand any real chance of imposing itself after WW I. The Social-Democratic Party was in a double opposition: against a society hostile to the overall socialist idea, and against the liberal practice, dominant in the epoch. Thus, the left of the center lost the chance to constitute a strong force, necessary for a lasting balance. That is how the regime of parliamentary democracy, almost always fragile, collapsed easily at the end of the fourth decade, under the pressure of the extremist movements in the country and abroad. The Romanian extreme right played an important role in the abolishment of that democracy, leaving its mark on a tragic episode of the history of this century. The years of the collapse, as the Second World War was called, recruited their actors from both extremes, actors who agreed more than once to collaborate for a "new order", united in their anti-liberal and anti-democratic activity. It is worth reminding here that the mentor of the legionary movement, the philosopher Nae Ionescu, reproached Iuliu Maniu for not being brave enough, when in power, to "organize the mass party and the party dictatorship." Dilema veche, 6-12 January 2006 Alexandru Zub (b. 1934), a historian and political prisoner during the communist regime, is the Director of the A. D. Xenopol History Institute in Jassy and Head of the History Department of the Romanian Academy. 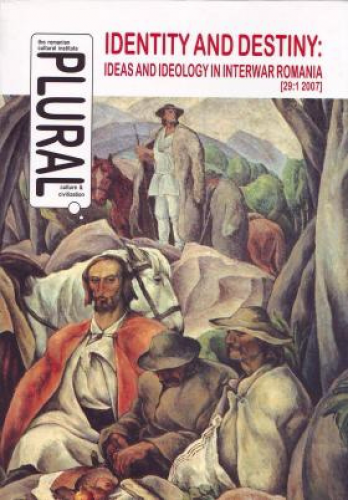