“Twenty‑two years after this volume was first published in Romanian and nine years after a second release, it occurred to me to have it translated into English. My decision was prompted by the many Romanian and foreign students, master’s students and doctoral candidates who asked me, in the past few years, how to find a copy. I learned then that photocopies of my already out‑of‑stock book circulated in various parts of Romania and abroad.
In 2000, when it first came out, this disquisition was one of the few available at home and abroad to deal with a rather delicate topic – considering the recent escape from the communist ideological straitjacket. A number of works on the visual culture of the period in point have been released meanwhile in various languages of Eastern Europe, yet the lingering dearth suggests that my study may have not lost its practicality. (…)

This book proposes a comprehensive tableau of fine arts in Romania between 1945 and 1989 from a vantage point that brings together the history of art as well as political science and sociology. It is neither a history of stylistic trends nor of artistic personalities hallmarking the period in question, as was customary with the various studies and essays published in Romania before and after 1989.

For all the dearth of information and the constraints obtaining prior to this date, the book sets out from the premise that a fresh scrutiny – prompted by the desire to reconstruct a truer picture of the artistic phenomenon with all its determinations – should bring out other levels of understanding or angles of interpretation than those that used to make the rule. This shift in method implies no longer perceiving the history of art as the history of strictly stylistic modifications but going for a more contextual approach, accompanied by a better grasp of social history of art and of political sciences data.” – Magda Cârneci 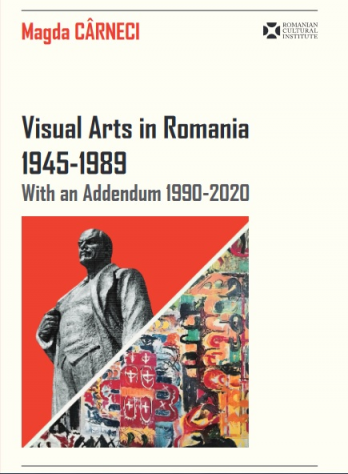