Sometimes it is more difficult to win the peace than to win the war. This is what the historian Şerban Pavelescu shows by analyzing “The Peaces of the Greater Romania”. Romania’s status at the Peace Conference was ambiguous, because the separate peace concluded with the Central Powers at Buftea and Bucharest, albeit not ratified by King Ferdinand and unrecognized by our allies, involved the risk of excluding Romania from the belligerent states. The ability of Romanian politicians was impressive. They managed to impose the status of co-belligerent by alternating flexibility and determinacy. Their contribution in the winning of the peace, i.e. the several peaces with Germany, Austria, Hungary, Bulgaria and Turkey equaled the valiance and strategic expertise of the military commanders that won the battles of Mărăşti, Mărăşeşti and Oituz.

In the times when the photographic technique was in its infancy and the camera was difficult to use on the front lines the painters were in charge to depict the war events. Carol Popp de Szathmári and Nicolae Grigorescu illustrated the War for Independence of 1877. They managed to represent with realism and brilliance the heroic and glorious deeds of “Our Soldiers” as the poet Alecsandri called them. Grigorescu’s large canvas, “The charge at Smârdan”, remained as an emblem for the collective bravery. The more melancholic and somber pictures represented mainly the Turkish prisoners of war.

It was not the same case in the First World War. The sordid circumstances on the front line, the drama of the retreat were the subjects that inspired the painters. Tonitza, like Topârceanu, was taken prisoner in the battle of Turtucaia and spent two years in a camp in southern Bulgaria. After having overcome his initial depression, he started to edit an illustrated magazine hand-made in just one copy per issue. He authored the texts and the drawings too. The mission of the magazine was to raise the prisoners’ moral by the traditional Romanian methods of taking the rough with the smooth and of laughing among tears. After the war, the drawings illustrated Millian-Maximin’s book “In the Hands of the Enemy. A prisoner’s Memoir”. We owe to Emilia Cernăianu this interesting research in art history.

Some distinguished Romanian intellectuals of the nineteenth century regarded with mistrust the foreigners that came to settle in, albeit they did not come from the Third World, but from countries more advanced than ours, such as France, Italy and England. Many of these immigrants integrated admirably in the national context and proved themselves outstanding patriots. The image of “The Revolutionary Romania” had as a model the Englishwoman Mary Grant, wife of the liberal politician C.A. Rosetti and sister of the engineer who built an important bridge in Bucharest, still called Grant. She was represented by the Austrian painter Rosenthal in a folk costume, surrounded by appropriate symbols.

The princes Cantacuzino came into Romania in the times when the rulers of the country were Greeks from Fanar, appointed by the Turks. Prince Şerban Cantacuzino remained famous for publishing the first Bible in Romanian language, which remained a milestone in the Romanian culture. Steluţa Boroghină has studied another member of this family, Ion Cantacuzino, a distinguished scientist and also a man of action. He developed the substances used to vaccinate against cholera and typhoid fever, with important results during the Balkan wars and the First World War. He founded an institute to prepare serums, which gained a notable prestige. He maintained in the institute an atmosphere of a high cultural level. The people he trained proudly called themselves “Cantacuzins” and continued as disciples to develop the school he initiated. A connoisseur and an art collector, he donated to the state a large part of his objects, so that everybody could have access to them. When he noticed the artistic vocation of one of his technicians, he offered him a scholarship from his own money in order for him to go to Paris and develop his talent. That is how the painter Dumitru Ghiaţă made a success of himself.

Cristian Pătrăşconiu considers sensibly that the small anecdotic details add zest and fascination to major history. He tells the story of a football team that had to be representative of the Greater Romania. They say that anybody can be a football expert, but the author’s hermeneutic approach goes beyond simple comments.

Jean-Louis Chrétien wrote such an exciting book on the concept of fragility, that two important philosophers, Michaël Fœssel and Camille Riquier were tempted to enter into a dialogue with him. Writing supposes a discipline which does not leave enough space for divagation. That is why an oral comment with the author is useful: it unveils thoughts which prudence and scientific rigor eliminate from the duly edited page. The obvious image of fragility is the bottle that breaks so easily. However, St. Augustine claimed that there are amphora that last intact more than a human being. The ancient Greeks ignored fragility; they were concerned with asthenia, i.e. the lack of vigor. The Latin and Christian cultures developed the notion of fragility. It is interesting to note that this concept has not an adequate antonym. Contemplating the ruins provides an intuition of the fragility, not devoid of sentimentality. It is just possible that a Roman conqueror who had meditated on the ruins of Carthage should have got the presentment of the fall of Rome.

The feminism asserts itself ever more provocatively, challenging the traditional claims of the male virility. Rodica Binder unveils the ideological fundaments of the movement #MeToo. The revisiting of careers (mainly in the cinema) which involved sexual harassments and embarrassing compromises, does not restrict itself to denouncements; it is used as a weapon for getting satisfaction by settling accounts. Jean-Claude Soulages and Alexandra-Oana Irimescu provide an insightful analysis of fashion blogs edited by women. These challenge the sumptuous fashion magazines such as Vogueor Elle, which promoted a glamorous image of the woman as seen from the vantage point of men’s tastes. On the contrary, these blogs propose solutions for the overweight and other disgraced physical types. The old slogan I am black and I am proudseems to have been turned into I am homely and perfectly contented.

It seems that in the feminist era there is no place for jealousy. Christian Kläui contests this opinion. Jealousy comes from zeal. In the Ancient Testament, God claims exclusive worship, He is zealous, but also jealous. The author considers Freud’s and Lacan’s conceptions about jealousy and seems to agree with their idea that jealousy is related to homosexuality. One is jealous of the man that he himself desires. The examples provided are exclusively masculine (Othello, Pozdnycheff from The Kreutzer Sonata), which leaves aside the feminine jealousy, very interesting too.

Ferdinand Mount goes back and forth in time in order to present the variations in the appreciation of Goethe’s works. Nathaniel Rich reconsiders Philip Roth’s novels in a study completed just before Roth passed away. Mircea Cosea shows what is still valid in Marxian theory two centuries after the birth of its author. The totalitarian regimes that claimed him as a guide inspired fear, but were also an object of ridicule, as Victor Ivanovici proves in his delectable study “The Wit Was Born in the East”.

The visual arts form a consistent section of this issue. Iolanda Malamen presents the artist Angela Tomaselli. Two of her works can be seen on our covers. The neural mechanisms involved in the reception of movies are scientifically analyzed by Mircea Deaca. Important film directors, such as Paolo Pasolini and Chris Marker are reconsidered by Dacia Maraini and Olivier Mongin, respectively. The famous architect Renzo Piano expresses the ideas that underline his creations.

The important theatrical event “The International Shakespeare Festival” from Craiova is extensively analyzed. A conversation of a member of our team with Christian Schuh, the director of the French company Les Arts et Mouvants, shows the sophistication that may be involved in a theatrical performance.

Among the many literary fragments, we mention just one, from the novel Le Lambeau, by Philippe Lançon, one of the few survivors from the terrorist attack on the journalists from the publication Charlie Hebdo. He describes step by step his long and painful recovering process. One remains with the bitter taste that culture is the main target for the dark violence of terrorism. 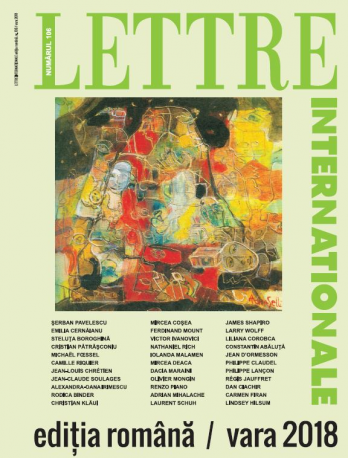