In Tolstoy’s War and Peace, there is a marginal, but highly amusing, character, the diplomat Bilibin. He is admired for his wit and feared for his sarcasm. He gives prince Andrew a mischievous account of the 1807 campaign, marked by the battles of Eylau and Friedland, which led to the Treaties of Tilsit between Russia and France, the latter getting the upper side. According to Bilibin, the rivalry between the Russian generals Barclay de Tolly and Benigsen, who were intent to subvert each other, was responsible for Napoleon’s success. General Averescu’s letters to King Ferdinand, and respectively, to Queen Marie of Romania, written during the Great War (one wouldn’t have surmised then that it would be renamed the First World War) point out to the same difficult cooperation. There was, at the time, a major dissent between the politicians and the military commanders, and also important rivalries between generals. Adrian Cioroianu takes up this subject, but he is keen to focus on the present and shows what we should learn from the past. Historia will keep being magistra vitæ. Vera Molea has studied minutely the theatrical life in the occupied Bucharest, but also in Jassy, where the authorities took refuge, and on the lines of combat, since artists were bound to do their best, in order to restore the morals of the soldiers. The picture she unveils is both exciting and poignant.

The Oxford dictionary proclaimed “post-truth” the “word of the year 2016”. We publish two essays on the subject. Their authors refuse to reduce it to a mere voluntary mystification. Jean-Claude Monod insists that, in a democratic context, the opinion, which fuels the public debate, is more important than the definitive truth that should not be contradicted. The author of this editorial examines the post-truth in the history of science. While the truth is based on the crucial experiment (experimentum crucis) performed in the aseptic environment of the laboratory, the post-truth accounts for the individual, authentic, experience, which is irreducible to theoretical abstraction. Rodica Binder lets us know what challenges the best minds in Germany. She focuses on the German philosopher born in Correa, Byung-Chul Han, who reinvents the Schopenhauer’s pessimism in terms of present-day interpretations.

We are naturally constrained to present our content in a sequential order, as contributions are grouped into sections. However, we think it proper to offer various links between the articles, thus suggesting a non-linear reading. Ion Vianu considers the psychiatrist’s dilemma: either to act for the benefit of the patient, against his free will, or to endorse himself, by an awkward transfer, the pathological content of his or her mind. Should one practice psychiatry by medication, or anti-psychiatry by empathy? Vianu’s thoughts meet Roberto Blatt’s. The latter provides an in-depth analysis of Yuval Harari’s best-sellers, Homo Sapiensand Homo Deus. In the first, Harari provides a personal interpretation, duly argued, about the evolution of humanity from the origins to the present, while in the second, he makes bold predictions concerning a radical anthropological revolution. This one will not be based on natural selection, but on a combination of biotechnology and artificial intelligence. Man is not going to turn into a ”superman”, but into a genuine ”god”. Medicine will soon range death to a merely accidental level, and psychiatry based on neurochemistry will offer anyone the possibility, if not even the obligation to be happy. Roberto Blatt does not contest Harari’s line of reasoning, but he subjects it to the mathematical method called reductio ad absurdum. Assuming Harari’s ideas are true, what are their consequences?

We dedicate a fine arts sections to three important artists: Paula Ribariu, Lucian Cioata and Maria Cioata. Paula Ribariu, whose works embellish our covers, is a mysterious and profound artist, who created a new universe from archaic building blocks. One penetrates it in awe and confusion, but Constantin Abaluta and Iolanda Malamen provide some orientation trajectories. The artist’s diary show how apparently commonplace details of everyday life can trigger the subtle process of inspiration. Vladimir Bulat rejects the repulsive jargon of art critics, in order to decode empathetically the art exhibition in which the Lucian Cioata’s paintings and Maria Cioata’s ceramics enter into a synergy under the double sign of the ‘wet’ and the ”hot”.

Georges Banu reveals how the obsession of neurosis invades the theatrical stage, transforming it into an actual psychiatric hospital. Karin Brack talks with Frank Raddatz about the present trends in theatrical scenery. The theatre is also the main subject of the exciting dialogue between Lakis Proguidis and Yasmina Reza. Its first art dates back from the beginning of the new Century, when Yasmina Reza was on the threshold of fame, and the second part, dated nowadays, shows the satisfactions, as well as the sorrows, that success brings about. It is like reading one after the other The Three Musketeersand Twenty Years After.

Economy and morality go hand in hand. Mircea Cosea and Cass R. Sunstein prove it in two brilliant essays. The theoretical models of economy assume that the agent is perfectly rational, that is he makes decisions solely based on the optimization of his or her gains. The failure of such models is due to the neglect of the psychological factors, as well of the ethical values that are prone to the human factor. ”The starlit heaven above”, said Kant, mirrors the ”moral law within me”.

We publish an essential fragment from Lakis Proguidis’ book, Rabelais. Que le roman commence!, distinguished with the prize for essay by the French section of Pen Club. It is a treat to read a book, which proves that the author does not only provide a theoretical research, but involves his feelings with his ideas. The author’s conception is highly original. He does not relate Rabelais to the proto-novels of antiquity (Apuleius, Longos), but to the Medieval Mysteries that blended the sacred and the profane. Along the same line, Anne Applebaum suggests that the European Union cannot achieve a profound meaning, in the absence of a new narrative, which would capture the collective imaginary.

Nobody can make sense of his or her life, without taking hints from literature. The story orders the multitude of details an existence is made of, endows it with coherence and, eventually, with a transcendent meaning. 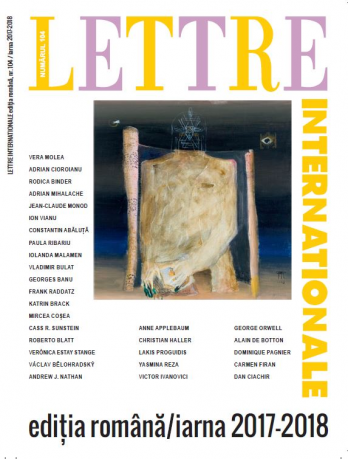