This year marks a century from the Great October Revolution, a controversial event, which, anyway, “shook up the world” and traced new paths in history. In the past, the event was duly celebrated on each anniversary. In the fifties, every November 7 the Romanian citizens had to march in the main boulevards of Bucharest, grouped in columns, showing off enthusiasm. Nowadays it is perfectly clear that “the Great Revolution” was nothing but a coup well planned by Lenin and Trotsky. Their method would be later described by Curzio Malaparte in his best seller on the techniques of a successful coup. The so-called October Revolution was a must meant to counteract the genuine March Revolution, which put an end to autocracy in Russia. At that time, Lenin was in Switzerland and felt bitterly discomfited. It seemed that he had missed the train of history, but the German Secret Services provided another train (well shuttered), so that he was able to reach Petrograd almost on time and he started the preparations for taking up the power. Even the Bolsheviks were shocked by Lenin’s radicalism, as shown from his first public speech, thus his success was highly improbable. His attempt to seize the power in July 1917 failed and he had to hide in a hut at Razliv, to avoid arrest. In October, the coup was better managed, so that he and his partners won the game.

Geroges Nivat, in The Red Year shows that the entire Russian society, and not only Putin’s government, is reticent about the Great October Revolution. “The Ten Days that Changed the World” caused more distress than benefits. Nivat shows that in order to avoid the celebration of the revolution, without ignoring it downright, the Russians commemorate the Liberation of Moscow from the Polish invaders on November 4, 1610. A time lag of three days does not really matter.

The seize of power by the Bolsheviks stirred an attempt at artistic renewal and thus the social revolution was accompanied by a cultural one. The next day after the coup, Lunacharsky, the People’s Commissar for Culture, appealed to everybody who was somebody to join him and to present new and ambitious projects. Meyerhold showed up instantly, Stanislavski took his time, but eventually everybody rallied around the bags of money. A brilliant avant-garde movement developed in the 1920s, under the name of Proletkult. This term is wrongly associated today with the ideologically fraught “socialist realism” promoted by Stalin after 1927 and later by Zhdanov. The innovative and imaginative impetus of the 1920s was soon to be stifled.

May 1968 was a cultural revolution which attempted to become also a social one, but failed. Bernd Cailloux was in his formative years at the time, and in his dialogue with Frank Raddatz, he looks back on the past events not with anger, but clear-headed. The ample generation of baby-boomers had reached its maturity. It was not a lost, but a spoilt generation, which claimed to change the world by taking the imagination to power. They young ones of that time did not succeed, but without their efforts the world of nowadays would not look the same.

The ‘sixties’ have also brought about the sexual revolution. The debate on The Adventures of the Bodybrings some interesting insights into this problem. From St. Augustine to Michel Foucault, the discourse on body and sex has developed continuously. The participants assembled around Michaël Fœssel insist that it is now the time for a more relaxed relationship between the person and his or her body. For earlier generations, the body was a burden. The philosopher Constantin Noica referred to it as “my friend, the pig”, which needs food and a little exercise, in order to keep quiet. The ‘new’ approach is to conciliate the being to the body that it begot, without aggressing it by manipulative techniques or by any imposed transformations. It is not something external to us, so that we should not operate on it at will. However, you can use it as a sort of ‘sexual capital’, as Eva Illouz and Dana Kaplan explain in The Forms of Sexual Capital. A well-managed body and a sexual gratification are assets that can be effectively used in a competitive market force, in order to achieve an economical benefit. Good-looking and sexually satisfied people get better jobs and are more easily promoted than the grunted repressed. It is indeed highly desirable to have a lot of money, but, in order to make it, it is advisable to enquire about the means of their production. This is what Mircea Cosea explains in his paper The Romanian ‘Fiat Money’. One can produce money out of thin air, either if one is a state, which is safer, or a simple citizen, which is a bit risky.

When the celebration of the Great October Revolution was re-fashioned as “The week of Russian Culture” many intellectuals queued at the Cretzulescu Bookshop in Bucharest, in order to benefit from the generous offers. One could find the best of the best, especially as far as scientific works were concerned, at very low prices. The explanation is that URSS ignored the issue of intellectual property and did not give a damn about copyright. They translated everything into Russian, without paying a dime. We started to learn Russian, a language we refused in high-school, albeit it was compulsory, because we wanted to keep up, paradoxically, with Western scientific achievements. I considered the problem of intellectual property in my paper Is Intellectual Property Sacred? The methods to protect intellectual property have evolved and have become increasingly restrictive. They favor commercially successful authors, but mainly editors and distributors. The victims are precisely the content providers, who need intellectual stimulation. They are interested in more refined and less profitable works, but the access to them has become more difficult. As a matter of fact, Matthew Webb insists in his paper The Brave New World of Genetic Manipulationthat the intellectual property rights tend to expand into the natural world at large. Once a company detects a correlation between a sequence of genes and a specific macro characteristic (such as an illness), it feels empowered to protect under a patent the sequence itself, not only the procedure of selecting it. This shows that the protection of intellectual property should not be extended beyond the limits of reasonability.

One may notice in the street or in buses and trams more and more people headphones on. What do they listen to, apart from conversations on the phone? One can safely assume that it is commercial music. It is probably a late effect of the ‘sixties’, when legendary groups, such as Beatles and Rolling Stones, got the ear of the general public. What happens then to high-end music? Mihu Iliescu comments on this issue in From Modernism to Postmodernism. An Impossible Revolution. The modernism in music exacerbated the mathematical rigor (especially in the integral serialism) and, as a consequence, lost its public, by refusing any melodious complacency. The postmodernism wanted to recuperate the capacity of seduction of the older (classical) music, but it was too late. The Muzak seems to satisfy those still interested in the echoes of old time music. In the fragment of Stéphanie Kalfon’s novel, Satie’s Umbrellaswe found a fine remembrance of the genuine music enjoyed long ago.

Most readers are readers of novels. Peter Brooks in More than a Novelwonders if Hugo’s Miserablesis actually the greatest novel of the 19th Century. Patrice Jean goes back to M-me Bovary, another great novel f the same century, but he is less interested in the sentimental turmoil of the main character, than in the peculiarities of the secondary ones. At the woman’s deathbed, two ideologues continue their endless debate. One is Father Bournisien, who represents the self-righteous conservatives; the other is the chemist Homais, a pathetic relic of the Enlightenment. Flaubert is merciless to both of them, and Patrice Jean makes fun of “Mr. Homais’ charm”. Lakis Proguidis and Massimo Rizzante remind us that the novel has the marvelous capacity to ‘make worlds’, wherein we can enter, get ourselves lost, but also get better. Miguel Gallego Roca considers the authors of a single book each, focusing on Luis Martín-Santos and his remarkable novel, The Time of Silence.

Lesley Chamberlain brings forth the figure of Pushkin in the context of the reprisals against the Decembrists. His miniature masterpiece Mozart and Salieri was turned into a chamber opera by Rimsky-Korsakov and, later on, was developed as a major play by Peter Shaffer, which eventually became Milos Forman’s blockbuster. It is worthwhile to go back to the origin of these big hits. 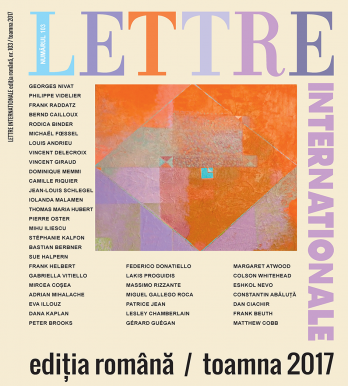