The American philosopher Costica Bradatan, of Romanian origin, obtained an important international success with his book about the lives of philosophers (which we discussed in a previous issue). He emphasized that some philosophers actually live their ideas, and are even ready to die for them. We assume that this very success made him approach the subject of failure in his new book, a work in progress as yet. We present a chapter concerning Emil Cioran, the “philosopher of failure”. Stendhal said once that success is important because it eases the internal turmoil generated by self-doubt and, as a consequence, turns out the best in us. Most people, once success has been attained, tend to stop moving on and continue to practice the methods by which they have achieved it. The best of the best among them, however, have the guts to demolish their own success. They get beyond it when they cease to take into account their contemporaries’ expectations, aiming to address the “next” generations. That is what Rembrandt did starting from the Night Watch, also Beethoven after the Ninth Symphony, when he embarked upon his final quartettes. Cioran had been aware from the start of the virtues of failure, and he duly cultivated it. In his last interview, Sartre stated that “any life, whatever its glamour, is but the story of a failure”. He diminished, however, the significance of his assertion by explaining that, for him, failure meant he could not rival a philosopher like Hegel. Hegel, as well as Spinoza, are the main characters of John Roberts’ essay, which raises the question whether “ the error in reasoning is a plain sign of failure”. Contrary to Descartes, who claimed that error is something one should get rid of (just as software engineers think, following the Cartesian paradigm), Hegel, and Spinoza before him, considered error as something productive, because it stems from the fundamental philosophical doubt: “What if the state of the world were different from what we assume?” According to Spinoza and Hegel, truth is the result of a mental process prone to errors. Truth is reconstructed retrospectively and remains for ever incomplete. Thomas Nagel’s elegant essay about consciousness is part of the same problem. Is consciousness merely an illusion we build from neuronal processes, or is it something irreducible to such material infrastructure? These are issues worth reflecting upon, although definite solutions are unavailable. If we take seriously the challenge of error, why not try to subvert, or at least to circumvent, the laws of physics themselves? This is what Thomas Barlow suggests cum grano salisin his playful novel, A Theory of Nothing. Gheorghe M. Ștefan considers this book from the point of view of the philosophy of science, but also based on his first hand experience as a researcher perpetually attempting to raise funds.

A section is devoted to the debate concerning the fate of literature in the age of the internet. Paolo Giordano thinks that the problem of the nature of the literary infrastructure (paper vs. screen) has been overrated. The fact that one loses the sensorial feeling associated with the traditional book, while reading electronic texts, is true, but minor. According to him, the real danger lies in the development of the hyper-lecture, which consists in random passing from one fragment to another, from a text to an image etc. This subverts the close reading, which gets into the depth of the narrative and develops the reader’s imagination. His reasoning has a point, but it is not a strong one. Photography was initially denied an artistic status because it offered only successive instants taken mechanically from real life; cinema was blamed for directing the mind to move (cinematically) one-way only; television is still considered a sort of cheap entertainment adequate only for infantile minds. However, the more sophisticated products of such media share the complexity related to literary works. As a matter of fact, the hyper-lecture has long been practiced in the study of scientific issues, when a footnote or a bibliographical mentioning determines the reader to go from one text to another. Massimo Rizzante provides such hyper-textual hints when he travels all the way back in time from Italo Calvino to Lodovico Ariosto. Moreover, Paolo Giordano claims that most distinguished writers cared to mention in their works only technological devices already obsolete at the time of the story. They were not keen on technological novelty, so that they preferred the telegraph to the telephone. This argument is easily rejected by the example of Proust, who provides a sophisticated analysis of the psychology of the telephone communication. Nicolae Manolescu makes a good point when he deplores the lack of critical spirit of the texts disseminated online. It is a new form of folklore, he admits, but even the best of the traditional folklore needed professional literati in order to penetrate the cultural sphere. What would Romanian folk poetry mean without an author like Vasile Alecsandri to promote it?

Any reader translates a text into his personal language. Victor Ivanovici considers the paradox of translation: one has to observe closely the original author’s turns of language and, at the same time, the text must remain seductive when transposed into the reader’s language. Some languages are more apt than others to host the foreign text. French, because of its rigor, keeps the distance. German modeled itself by translations, such as Schlegel’s version of Shakespeare. That is why Goethe was able to develop the concept of World Literature(Weltliteratur). Romanian was enriched by the translations from Joyce, Proust, Burroughs, Coetzee etc. However, as Kogalniceanu said, “one cannot build a literature from translations only”. Some writers who go deep down into the subtleties of their language are “lost in translation”, to quote the title of a successful movie. This is the case of Ion Creanga and Mihai Eminescu, and also the case of Pushkin. Gary Saul Morson wonders if we’ll ever have a definitive image of this author. Even Nabokov’s over-pretentious translation of Pushkin’s Eugene Oneginprovided the author more harm than fame. However, Pushkin continues to haunt the imagination of his readers, whatever the language.

Lesley Chamberlain acts as an expert detective in decoding Cameron McCabe’s novel The Face on the Cutting Room Floor. She examines attentively any textual clue in order to unveil the ethnic origin and the cultural ambience of the author of this postmodern detective story, which seems to end all detective stories. The author is an Austrian refugee in Britain, aiming to avoid the Nazi threat. He wrote the novel in order to improve his colloquial English. The stylistic indices present in the text are even more effective than those involved in the whodunitnarrative.

Mircea Cosea meets Flavien Dupuis in the attempt to show how everything turns into merchandise, practically all the world being “for sale”. Marx claimed that there are some entities that cannot be exchanged in a market economy: “If in return to your love you do not receive also love, then your passion is simply an error which leads to unhappiness”. Meanwhile, even the personal qualities have become subject for sale as merchandise. Dan Alexandru Chita analyses the influential book Empire, by Negri and Hardt, and shows how the critique of contemporary capitalism may be as virulent and also as seductive as the one provided by Marx in The Communist Manifesto(a genuine romantic literary production). Sadly, the new critique meets the old one in the inability to imagine an alternative future. Sartre claimed that Marxism was “the horizon impossible to transcend” of the XXth Century. Can we say the same about “Capitalism Now”? 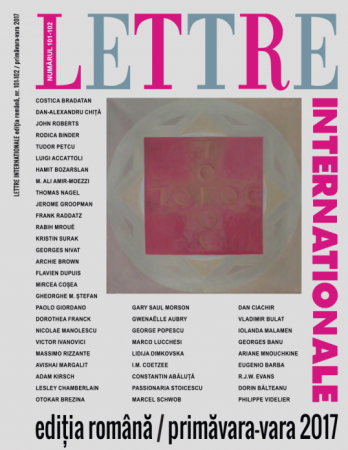