Although a painting can never stop a bullet, a painting can stop a bullet from being fired. Culture is a central component of conflicts between different groups and ethnicities. So what could be more appropriate than using culture as a tool for conflict resolution? After centuries of war, Europe has particular experience in how to create peaceful and cooperative ways of co-existing. What kinds of external cultural policies does Europe need to embrace that will allow art, education and intercultural dialogue to open doors and build trust between communities – and help prevent conflicts around the globe?

1. THE POTENTIAL OF CULTURE

There is no doubt that culture can help to resolve conflicts (and can also be abused in order to fuel them). But cultural activity cannot be a substitute for political (and economic) initiatives for conflict resolution. How can culture help with conflict management? How can we make the best possible use of the positive role of culture? And what cultural policy initiatives does Europe need to set in motion in order to help regions beset by conflict?

What are the positive, practical experiences of external cultural policy initiatives in conflict regions? Which ones have been proven worthwhile and what circumstances are needed for their success? Is it possible to successfully transfer initiatives that have shown positive results in one place to another location? Conflict experts and peacebuilders share their experiences, gather examples of best practice and tell us their hopes for the future.

Michael Gleich
Healing from within
When vision and will come together, anything is possible. Even peace. Fearless,
strong-willed people are working in conflict zones, undeterred by the day-to-day violence, and dedicating themselves to civil society initiatives. they combine professional strategies for conflict resolution with cultural empathy and are demonstrating how cultural differences can be experienced in a constructive way.

Martina Fischer
Fighting trauma and taboo
Cultural production alone is not enough to break down the dominance of ethno-nationalist parties and beliefs, to overthrow corrupt ruling systems and create a tolerant society. But it is able to create niches where alternative debate is possible, and in this way give people hope and encourage them to put into context the omnipotence of the ethnocentric and counter it with other concepts of belonging, tradition, history and identity.

Jemima Montagu
Afghanistan and beyond
Cultural activity supported by foreign governments is barely visible in Afghanistan. Why isn’t more energy being put into alternative forms of diplomacy and development? When we consider the lack of success that military action has had in terms of establishing peace and security in the country, it would make sense to try to strengthen civil society – and to put more emphasis on initiatives based around art and culture.

Raphael Vergin
Wars begin in the minds of men
Whether it is Catholics in Northern Ireland or Basques in Spain, cultural arguments have been used to reject what is seen as foreign rule. Culture plays a key role in the way conflicts between different groups and ethnicities play out and it must play its part in resolving conflicts. But how? Cross-border cultural and educational programmes have powerful potential for promoting peace in many places around the world.

Bernd Reiter
A voice for the voiceless
The South African government uses culture and art as a way of achieving togetherness,
mutual understanding and respect and as a means of overcoming the long and heavy legacy of colonialism and apartheid. In Brazil, music is commonly used to lure youth away from drugs and crime. Percussion, in particular, seems to offer the additional side-effect of channelling frustration and aggression into harmony. What else can culture do?

Peter Jenkinson
Setting the truth free
Northern Ireland is only just beginning to emerge from a painful and destructive period characterised by sectarianism, isolationism, armed conflict and murder. In common with so many conflicts, the roots of ‘the Troubles’ in Northern Ireland were arguably as much cultural as they were political and economic. Can culture also help to create lasting peace?

3. THE POWER OF THE ARTIST: THE SEARCH FOR COMMON GROUND

Whether during the Middle East conflict, the Chinese Cultural Revolution or the collapse of Yugoslavia, culture always has a special role to play. And each different location needs individual approaches when it comes to cultural initiatives and conflict resolution. Is there any common ground? How can music, literature, the fine arts and remembrance culture really exert an influence on society? We can learn from different experiences around the globe.

Yang Lian
The political in the poetical
There is rarely conflict between two vital cultures that are animated by creative individuals. And vice versa: a culture that is no longer vitalised by “humanity’s desires” takes on the rigor mortis of an instrument that can be only too easily abused. Such ‘cultureless’ conflicts are in fact struggles for power and vested interests. But literature can combat this, because all classics are imbued with one essential meaning: the aesthetic resistance of the individual in adversity.

Slavenka Drakulić
Reconciliation is not just going through the motions
Since the war in Bosnia ended in 1995 there has been much talk of reconciliation. A great deal of money has been spent on garnering the opinions of international experts, almost as if reconciliation were a branch of rocket science, rather than being about “settlement, understanding, compromise” between neighbours, as defined by the dictionary. But what does it really come down to?

Beqë Cufaj
Europe’s problem zone
Today it is still difficult to come to terms with the fact that, of all things, it was representatives of culture, literature, journalism, theatre and film who were the first to set off down the nationalistic route. One of the first victims of Serbian nationalism was the tiny province of Kosovo.

Salwa Bakr
Seeing with both eyes
The attitude of the West is all too often based on interests rather than on empathy and objectivity. Serious cultural dialogue and acceptance of the other‘s culture form the foundation for culture as an effective element in resolving international conflicts and clashes between different groups. But this dialogue has to be fair and we need to be
seeing with both eyes, not just one, writes Egyptian author Salwa Bakr.

Andrea Grill
Heckling from the balcony
All too often, art and culture are helpless in the face of violent conflicts. Nobody is going to write a book or carry out an academic study while bullets are flying around their ears. But it gives us the ability to bear the unbearable, not by simply accepting it but by thinking about it and living it. Austrian writer Andrea Grill gives an account of her own experiences.

Vladimir Ivanoff
The language of music
Bach, Mozart, Haydn and Beethoven provide solace amongst the sorrows of everyday life. In the National Youth Orchestra of Iraq young Kurds, Shiites and Sunnis come together to play a classical Western repertoire, along with a few compositions by contemporary Iraqi composers. But can music also create understanding and reconciliation? An artistic director describes his experiences.

Christian Schoen
Art and conflict
Artists do not believe any more than footballers that they can create world peace, even if both culture and sport have a very integrating effect on society. How can art have a positive effect and what conditions are necessary to achieve this? A curator looks for answers in Afghanistan and Eritrea.

4. THE ROLE OF EUNIC IN CRISIS REGIONS

Democracy, multilateralism and decades of experience in peaceful co-existence – Europe has a great deal to offer and should be investing more heavily in cultural relations around the globe as a way of sharing these specific experiences with others and helping to mitigate crisis situations. No organisation is better placed in this respect than EUNIC, the
network of European cultural relations institutes, with its 2,000 branches around the world.

Delphine Borione
A buffer for pacifying the people
Identity is not something abstract but is symbolised by objects, places, a church, a mosque, a bridge – places where everyone can relate to their own history. This history and these memories form the foundation for the future. This is why conflict intervention and cultural work both have to place great importance on protecting and reconstructing the cultural heritage.

Gottfried Wagner
Far from the feasible
If we are to give Europe a ‘face’ and throw Europe’s soft power into the pot in a world full of conflict, then public debate is essential. The world’s conflicts need to be addressed by European policies on cultural and other issues. We are still a long way from creating the necessary consensus on this, let alone from being ready to take action. What is to be done?

Yudhishthir Raj Isar
Beware of vaulting ambitions
Although a painting can never stop a bullet, a painting can stop a bullet from being fired. Executing that painting and putting it in place, however, is a specialised and complex affair. The author wonders whether this is really EUNIC’s business.

Robin Davies
Keeping doors open in difficult times
Let’s be more precise about the word ‘culture’. Let’s be more confident and ambitious about what cultural relations can achieve for the EU as a component of its external relations. Let’s allow the arts, education and intercultural dialogue to open doors and build trust between communities – and so help to prevent or resolve conflicts.

Martin Eichtinger
Little strokes fell big oaks
Cultural Institutes may not resolve conflicts, but with courageous and thoughtprovoking
programmes they can prepare the ground for breaking down stereotypes and prejudices so that societies can start to tackle sensitive issues.

Luciano Rispoli
A domain of peace
From the Age of Enlightenment to an Arab street, it has taken a long time to cross the Mediterranean. Finally, Europe can return the treasures of wisdom, philosophy and science to the Arab shores where they originated.

Ruth Ur talks to Jok Madut Jok
Food for the soul
In South Sudan, poverty and hunger are widespread as a result of decades of civil war.
Caring for refugees returning from neighbouring countries and other parts of the Sudan represents a major problem. Local fighting continues to flare up. Illiteracy remains at over 80%. What role can culture place in this kind of context? Interview with Dr Jok
Madut Jok, Undersecretary in the Ministry of Culture, Republic of South Sudan. 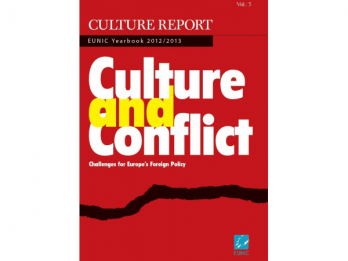