With good reason, Ion Caramitru, the new minister of culture, said in a recent television show that, if from the political and economic viewpoints we must still make efforts to align to the European standards, from the cultural point of view we have been in the European space for a long time. Apart from illustrious people who have settled abroad, school founders and launchers of new currents and new visions in the European sculpture, theater, or philosophy, very many young people come back to this country with awards won at international competitions, which bring them world consecration. Two dancers, who are choreographers at the same time, did that in 1996: Florin Fieroiu and Răzvan Mazilu. They belong to the youngest generation of contemporary dance performers and creators in our country. In early June, the winners' gala of the Rencontre Internationale de Bagnolet was held in Paris for a week, with an audience made up of specialists, for the most part: directors of choreographic centers, theater managers, agents, choreographers, and dancers from around the world. One of the prizes at Bagnolet was awarded to an independent professional choreographer, Christian Trouilla, for his piece Le grand jeu, which we had the opportunity to see in Bucharest in 1994: all the three performers were Romanian dancers – Florin Fieroiu, Mihai Mihalcea, and Cosmin Manolescu. The international jury in Paris also awarded several individual and collective prizes for performance. In 1996, four dancers got individual prizes: an American, a Frenchman, a Korean, and a Romanian, Florin Fieroiu. Because he had to come back to Romania before the finale of the Parisian gala, in order to take the graduation exam at the Choreography Faculty of the Bucharest Academy of Theater and Motion Pictures, he got the news about the award late, when he was in Romania. In November 1996, still in Paris, the seventh International Dance Competition was held, with two sections, classical and modern; the jury was made up of famous personalities of the two dancing styles. These were the jury members at the contemporary dance section: Ivan Favier and Anne Dreyfus (France), Peter Goss (South Africa), Robert North (UK), Lucas Vegetti (Italy), Rudi Van Dantzig (The Netherlands), Yorgas Loukas (director of the National Opera in Lyon), and Marc Jonkers (director of the Comic Opera in Berlin). That year's edition brought together 210 dancers from 39 countries, and it was presided over by Mrs. Bernadette Chirac, President Jacques Chirac's wife. In the contemporary dance section, three awards went French dancers, three to Chinese ones, one to an Israeli dancer, and one to a Romanian dancer, Răzvan Mazilu, who received the Prix de l'Association pour le Rayonnement de l'Opéra de Paris. The contest had three stages. In the first eliminating test, they request a solo out of the performer's repertoire: Răzvan Mazilu danced the Dying Swan by Camille Saint-Saens, in his own choreographic vision. In the semifinals, where they request two tests, namely one imposed choreography chosen out of three proposed pieces and a solo out of the performer's repertoire, Răzvan Mazilu danced L'Ange by Claude Brumachon to music by Wim Mertens and Impact, choreographed by his slightly older colleague Florin Fieroiu, to music by Dan Dediu. Eventually, at the final test, he presented Impact again, and at the winners' gala he danced Nocturne by Frederic Chopin, choreographed by Adina Cezar. These two awards that Florin Fieroiu and Răzvan Mazilu won have consecrated those two talented dancers internationally, but they also amount to an international recognition of the Romanian contemporary dance school. Equally, we should remember that the exigent jury awarded them both as performers and as choreographers, and that their creations appeared on the Parisian stage next to those of consecrated choreographers. We can also add that that the names of Gigi Căciuleanu, one of the choreographers for imposed solos, and Adina Cezar, whose piece was performed by Răzvan Mazilu at the winners' gala, link several generations of contemporary dance creation educated in the Romanian cultural space. 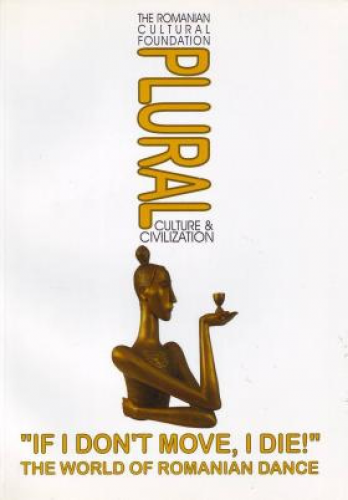